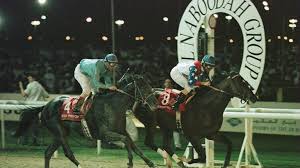 The Dubai Racing Club hoped to persevere with the March 28 Dubai World Cup (G1) in the midst of the coronavirus pandemic, but on Sunday, finally declared that the international racing festival could not go forward as scheduled:

“To safeguard the health of all participants, the higher organising committee of the Dubai World Cup has decided to postpone the 25th edition of the global event to the next year.

Further to the UAE Government’s precautionary measures against the virus, we believe it is our duty to help protect the well-being of residents and guests.

We would like to extend our sincere gratitude and appreciation to all the stakeholders of the Dubai World Cup, and we hope to welcome all participants and guests next year.”

With the decision coming just six days before Dubai World Cup night, and the day before entries were finalized, many internationals had already shipped. Some had been on the scene shortly after the Feb. 29 Saudi Cup festivities – among them Mucho Gusto and Tacitus as well as Dubai Golden Shaheen (G1) hopes Imperial Hint and Captain Scotty – but more arrivals had poured in recently.

American World Cup contenders Sir Winston, Math Wizard, and War Story landed last Wednesday as part of a 10-strong U.S. shipment. The others on board were Killybegs Captain for the Shaheen; United for the Dubai Sheema Classic (G1); UAE Derby (G2) hopefuls Shotski, Tizamagician, and Wrecking Crew; Texas Wedge for the Al Quoz Sprint (G1); and Gray Magician for the Godolphin Mile (G2).

Irish maestro Aidan O’Brien opted not to ship in the midst of uncertainty, pulling the plug on his team’s venture last Thursday.

Not surprisingly, the rest of the UAE racing season, originally scheduled to conclude at Meydan April 10, is also over according to an ensuing press release. The Emirates Racing Authority at the same time announced the cancellation of the April 11 Racing in Dubai Sale and the April 12 Horses in Training Sale