GRADE ONE CLEANSWEEP FOR BSA GRADUATES 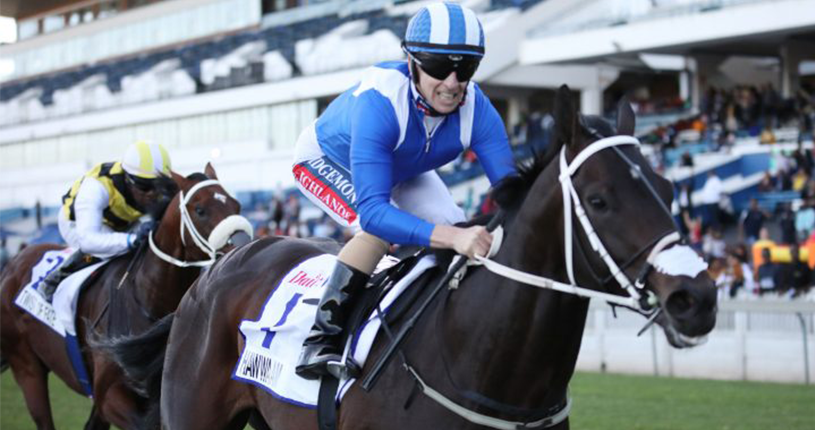 The Mike de Kock trained Hawwaam, a R1 000 000 buy from the 2017 National Yearling Sale, showed his class when romping home to a clear-cut and decisive victory in the H F Oppenheimer Horse Chestnut Stakes.

Last season’s Equus Champion 3YO Colt, the Sheikh Hamdan bin Rashid al Maktoum owned four-year-old pulled clear under jockey Callan Murray to land the 2020 Horse Chestnut Stakes by just under a length and a half.

Hawwaam, who was bred by Wilgerbosdrift & Mauritzfontein, has now won nine of just 12 starts (for earnings of R6 514 775, and his seven graded victories include wins in all of the G1 SA Classic, G1 Premier’s Champions Challenge, G1 Daily News 2000 and the aforementioned Horse Chestnut Stakes.

One of 96 stakes winners sired by multiple champion sire Silvano (who has 37 lots on offer at the upcoming National Yearling Sale), Hawwaam is one of three G1 winners produced by the Jet Master sired G3 Prix du Cap heroine Halfway To Heaven.

Halfway To Heaven, South Africa’s Broodmare Of The Year in 2018-2019, has a Silvano own brother to Hawwaam, by the name of Celestial City (Lot 185), on offer at this year’s Emperors Palace National Yearling Sale.

Trainer Fabian Habib picked up his first G1 triumph when he sent out Out Of Your League, a R130 000 buy from the 2018 Emperors Palace National 2YO Sale, to land Saturday’s SA Derby, the final leg of South Africa’s Triple Crown.

The Wynand Nel bred gelding made most of the running, under jockey Raymond Danielson, and showed plenty of heart when fighting back to score a half length win.

Now a three time winner from just nine starts, Out Of Your League took his earnings to R421 175 with his courageous win on Saturday.

Now unbeaten in six starts, the Wilgerbosdrift & Mauritzfontein bred Summer Pudding has a What A Winter half-brother, by the name of Vanderbilt (Lot 85), on offer at the 2020 Emperors Palace National Yearling Sale.