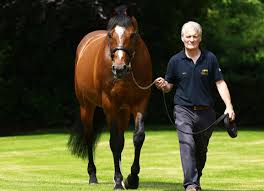 The world’s premier sire Galileo supplied a fourth winner of the 1000 Guineas, when his top-class daughter Love romped home to record a facile, four and a quarter length in Sunday’s G1 Qipco 1000 Guineas

Love, bred on the same Galileo/Pivotal cross as the Moutonshoek based G1 winner The United States, joins Minding, Winter and Hermosa as a1000 Guineas winner sired by Galileo.

The Coolmore homebred won the Group 1 Moyglare Stud Stakes last September, before finishing the season with a fine third behind Quadrilateral in the Group 1 Fillies’ Mile over Sunday’s course and distance. She truly reversed the Fillies’ Mile form on return, as she travelled well, before quickening to lead over a furlong out and raced clear to win by four and a quarter lengths, with previous foe Quadrilateral taking third.

The win seemingly came as no surprise to winning jockey Ryan Moore, who commented after the race, “She was in control of the race a long way out. She won as she liked, really. She’s a very uncomplicated filly and we’ve always thought an awful lot of her. She’s a typical Galileo filly.”

Love provided Aidan O’Brien with his sixth success in the prestigious Classic.