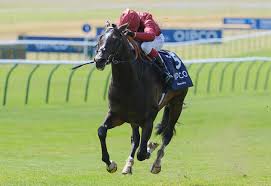 Top-class three-year-old Kameko, whose G3 Senorita Stakes winning dam Sweeter Still is a half-sister to the former Drakenstein Stud Kingsbarns, showed his class when he won the G1 Qipco 2000 Guineas at Newmarket on Saturday.

Pinatubo arrived unbeaten in six juvenile starts and boasting the highest two-year-old rating for 25 years – but he was only third as Kameko triumphed for Andrew Balding and champion jockey Oisin Murphy.

There was drama from the start as Kenzai Warrior nearly unshipped Jason Watson leaving the stalls, but all the main contenders soon settled in the pack as outsiders Persuasion and Juan Elcano cut out the early pace.

Kameko and Pinatubo were both perfectly poised to challenge and with a furlong to run it was between that pair and Aidan O’Brien’s Wichita for the first Classic of the season.

However, while 10-1 shot Kameko found plenty in the final half-furlong, the 5-6 favourite Pinatubo had no more to give and it was left to Wichita to chase home the winner, beaten a neck. Pinatubo finished a further length adrift.

Now a winner of three of just five starts (he won the G1 Vertem Futurity Trophy at two), Kameko is a son of champion US sire Kitten’s Joy.

He provided both his trainer and jockey with their first 2000 Guineas success.