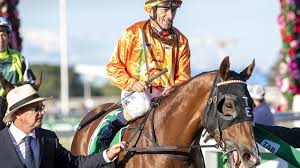 A plan that was a year in the making came to fruition when Tyzone, under South African born jockey Robbie Fradd, won Saturday’s G1 TAB Stradbroke Handicap at Eagle Farm.

Tyzone ran second in last year’s Stradbroke behind Trekking and trainer Toby Edmonds immediately set him for a return bout this year:

Starting at $14, Tyzone charged down the middle of the track to beat Madam Rogue ($51) by a head with a long head to Niccanova ($14) in third.

A son of Written Tycoon, Tyzone ran 1 minute 20.43 seconds which broke the 7 f course record that had had been set one race earlier by Rothfire.

Toby Edmonds, who is in the first season of a training partnership with his son Trent, got his first Group One winner after having four previous seconds.

Winning jockey Robbie Fradd, a South African who has ridden Group One winners around the world, also got his first Queensland Group One.

Trent Edmonds said it had been an emotional ride to getting the stable’s first Group One win.

“I am just a johnny-come-lately but people like Dad slog along for years trying to win big races,” he said.

“I am so thrilled for him. We felt Tyzone could win the Stradbroke after his second last year.

“We had looked at giving him a long spell but in the end he has raced in the spring and the summer.”