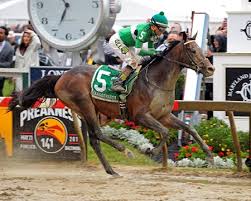 Xtrema became the first winner for Exaggerator  when she took a $32,520 maiden special weight for 2-year-old fillies June 11 at Golden Gate Fields.Xtrema was making her debut in the five-furlong test on the all-weather track.

Ridden by David Lopez, she settled in third as Maggie’s Magic set fractions of :21.75 and :46.76 through a half-mile and led into the stretch.

Coming out of the turn, Xtrema was still third but showed a quick turn of foot to pass the leaders in the stretch and open a four-length lead at the wire to finish in :59.62 on a fast track.

WinStar Farm’s Exaggerator, a three-time grade 1 winner by Curlin , finished second in the 2016 Kentucky Derby Presented by Yum! Brands (G1) and won the Preakness Stakes (G1). He was campaigned by similar connections in Big Chief Racing, Head of Plains Partners, Rocker O Ranch, and Desormeaux, who was also his trainer. Exaggerator was retired with earnings of $3,581,120 from a record of 6-3-1 in 15 starts.