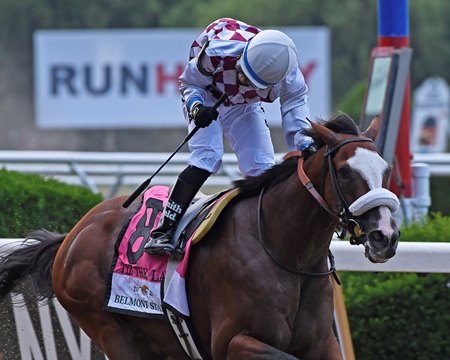 Tiz the Law assumed control leaving the far turn and rolled to an impressive 3 3/4-length victory in the $1 million Belmont Stakes, scoring as the 4-5 favorite in the opening leg of the 2020 Triple Crown.

Owned by Sackatoga Stables and trained by Barclay Tagg, the same connections of 2003 Kentucky Derby and Preakness winner Funny Cide, Tiz the Law raced up close from the start and never provided supporters with an anxious moment while being guided by regular rider Manny Franco.

“It looked to me like everything just went like clockwork,” Tagg said. “That’s the way the horse likes to run and that’s the position the horse likes to be in. Manny knows the horse very well. We discussed it quickly before I put him up on the horse, and I felt very confident Manny would ride him that way. I felt pretty solid about halfway down the lane. It’s a good feeling.”

“I was pretty confident by the time when we reached the seven-eighths pole,” Franco said of his trip. “He was so kind, he relaxed for me, and he was so comfortable. He never got keen, so I think that was the key.”

For the first time in its 152-year history, the Belmont Stakes kicked off the Triple Crown. The Kentucky Derby comes next on Sept. 5, and the Preakness will complete the series on Oct. 3. Due to the unusual circumstances this year, officials reduced the Belmont Stakes distance to 1 1/8 miles. It had been run at 1 1/2 miles since 1926.

TIz the Law stopped the teletimer in a sharp 1:46.53. It marked the first Triple Crown race win for Franco, and he was asked about the Kentucky Derby in 15 weeks.

“Man, I got the horse for the race,” the jockey said. “I’m very happy for the opportunity…I’m in good hands, (managing partner Jack Knowlton and Tagg) know what they’re doing. And the horse is very good.”

A son of Constitution and G2 San Gorgonio winner Tizfiz, Tiz The Law has now won five of six starts, with his other wins including scores in both the G1 Florida Derby and G1 Champagne Stakes. 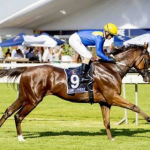 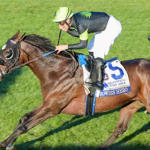 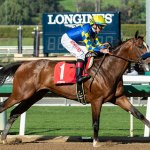 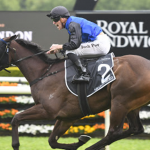 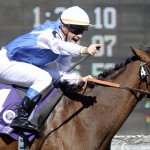 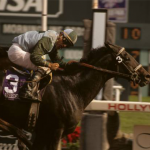