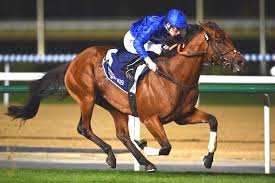 The Group 2 $450,000 Round 2 over 1900m, a key prep for the 2000m $12 million Dubai World Cup sponsored by Emirates Airline (G1), showed a new dimension for Godolphin’s multiple Group 1 winner Benbatl, who won his dirt debut with style under Christophe Soumillon. Raced prominently in third, just behind the pace set by G1 winner Roman Rosso and upstart Chiefdom, he switched out around the turn, took over while three-wide turning for home and held off fellow Dubawi offspring Military Law by two facile lengths. Gronkowski finished third, another 6¾ lengths astern the runner-up.

Trainer Saeed bin Suroor, who has twice won this with subsequent Dubai World Cup winners (Moon Ballad and Thunder Snow) was elated. The win was Benbatl’s 10th from 20 starts and added $270,000 to the 6-year-old’s bankroll to eclipse $5.7 million. A Group 1 winner on three continents, he will now point toward the big event in an attempt to give his connections a third consecutive triumph in tandem in the prestigious affair.

“He was the best horse in the field by far,” Soumillon said. “For sure, it was the first time on the dirt, but when the horses are really good, they can handle both surfaces. He has good gate speed, which is important for dirt racing. He was cruising the whole way. I was worried on the back straight, because he didn’t change legs properly—I had to force him twice to stay on his right leg. On the last turn, he stayed on his right leg for 200m, so I was little disappointed. Finally, he changed and when I came into the straight, I could feel straight away that he was able to run away and he did quite impressively.”