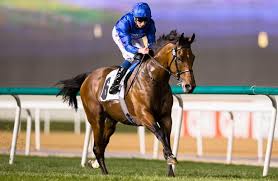 Thursday’s seven-race Dubai World Cup Carnival card, the eighth of 2020, was worth $1,355,000 and lived up to its billing as one of the most highly anticipated race days thus far this season. The evening was topped by four Group stakes and included three highly competitive handicaps, while also providing numerous clues toward the world’s richest race day, Dubai World Cup on March 28.

Living up to his rating of 126, the highest in the UAE, Godolphin’s Ghaiyyath made short work of his five opponents in the $200,000 Dubai Millennium (G3), easily taking command early and never allowing his talented opposition within six lengths of him after the first furlong. Reeling off 400m sectionals of 26.69, 49.69, 1:13.06 and 1:36.44, he came into the lane with a commanding lead over Group 1 winner Royal Meeting and defending champ Spotify. The son of Irish 2000 Guineas (G1) and Irish 1000 Guineas (G1) winners Dubawi and Nighttime finished up in a canter under the line in 2:00.33—a new stakes and track record for the 2000m on turf. The final winning margin was 8½ lengths, with Spotify, under James Doyle, running on well for second and Norwegian Derby winner Privilegiado returning to good form in third under Dane O’Neill. . Certain Lad, Desert Encounter and Royal Meeting completed the order of finish.

A 14-length winner in similar fashion two races back of the Grosser Preis von Baden (G1) in September and unplaced when last seen in the prestigious Prix de l’Arc de Triomphe (G1) in October, the Charlie Appleby trainee will now run in five weeks in the $6 million Longines Dubai Sheema Classic (G1).

William Buick, Jockey, GHAIYYATH (1st)—“He’s a very energetic horse and was a little bit fresh today. He puts a lot into everything he does. It was an exercise where we hoped to produce and he did it well. He’s a hugely talented horse and like Charlie mentioned, he’s going to get a nice rest until World Cup night now.”

Charlie Appleby, Trainer, GHAIYYATH (1st)—“I’m delighted. We’ve all seen what this horse can do, especially coming up his first start, there. The reason we’ve come here instead of going down the classic Sheema Classic route of running in the (Group 3) Dubai City of Gold (on Super Saturday, March 7) is that this gives us two more weeks. The plan was to just let him float into (the race) from his outside post and once he was on the lead, we would let him roll along. We’ve seen on numerous occasions what he can do when he’s left to his own devices like that. Hopefully we can just freshen him up now and aim toward the Sheema Classic. Knowing the nature of the beast, (free-running on the lead) is what you want to see. The main thing we all know in this game is just getting these horses to breathe. In the Arc, it was soft ground, but unfortunately he got hustled there and they went a strong gallop that day. He just could never get into a nice rhythm. Like any athlete, once you get them into a good rhythm where they’re breathing, they have the engine, which allows them to show their full potential.

“Ideally, you say you’ll have a wait and go straight (to the Sheema, in lieu of running today), but here in Dubai, he’s a bit more tricky than in the UK. We have stiffer gallops in the UK, where he we train on a flat track. He won’t want too much more galloping, because the more he does, the keener he gets. Hopefully now, with a run under his belt, we can just ease off on him and let him float into World Cup night and have a crack at the Sheema Classic.”