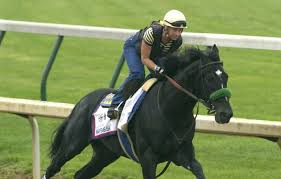 War Emblem, the winner of the 2002 Kentucky Derby (G1) and Preakness Stakes (G1), has died at age 21, Old Friends Thoroughbred Retirement Center announced March 11. War Emblem, who had been pensioned at Old Friends since 2015, was found deceased early Wednesday morning.

The cause of death is perceived to be a fatal paddock accident, but exact details are unknown. However, a full necropsy report is pending.

The near-black War Emblem was sold to Prince Ahmed bin Salman’s Thoroughbred Corporation and transferred to Bob Baffert’s barn after he captured the Illinois Derby (G2) in an impressive gate-to-wire victory.

Following an equally impressive win in the Preakness, War Emblem became a serious contender to capture the 12th Triple Crown, but he stumbled badly at the start of the Belmont Stakes (G1) and ended up beaten by longshot Sarava, who is also a retiree at Old Friends.

War Emblem went on to capture the Haskell Invitational (G1) for a third grade 1 win that year and was named champion 3-year-old colt. He was retired with seven wins from 13 starts and earnings of $3,491,000.

In a stud career blighted by lack of numbers, War Emblem left behind less than 200 foals, but his progeny included champion Robe Tissage.