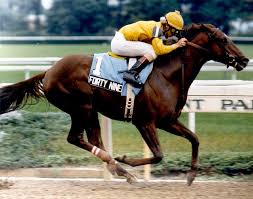 The son of Mr. Prospector had just turned 35 May 11 and had received many birthday wishes from fans, Yusa said on Twitter.

A homebred for Claiborne Farm out of the Tom Rolfe stakes winner File, Forty Niner was a brilliant 2-year-old. He won five of his six starts at 2, putting together a championship season with victories in the Sanford Stakes (G2), Futurity Stakes (G1), Champagne Stakes (G1), and Breeders’ Futurity (G2). He kept his top form at 3 when he won the Fountain of Youth Stakes (G2) and was runner-up by a neck to Brian’s Time in the Florida Derby (G1) on his way to a second-place finish in the Kentucky Derby (G1) behind Winning Colors. Forty Niner went on that year to set a track record at Monmouth Park, going a mile in 1:33.80 that set him up for a win in both the Haskell Invitational Stakes (G1) and Travers Stakes (G1).

His influence will live on in pedigrees through his prominent sire sons Distorted Humor  and Roar and their sons. Distorted Humor is represented this year by 24 sire-sons in North America, including Alternation, Jimmy Creed , Khozan, and Maclean’s Music . (Distorted Humor is also the sire of successful South African sires Flower Alley and Pathfork).