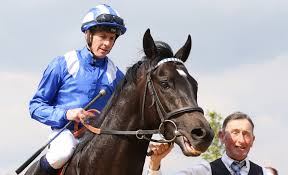 Sussex Stakes winner Mohaather has been retired to stud after picking up “significant bone bruising” in his near hind fetlock, connections have announced.

Trained by Marcus Tregoning, the Sheikh Hamdan Al Maktoum-owned colt came out on top in this year’s stellar renewal of the Group One feature at Glorious Goodwood,

Sheikh Hamdan’s racing manager Angus Gold said in a statement to the PA news agency: “Towards the end of last week it was noticed that Mohaather was not moving as well as he had been immediately after the Sussex Stakes.

Precautionary X-rays were taken over the weekend which have revealed significant bone bruising in his near hind fetlock joint; unfortunately this will put paid to the rest of his campaign, and as a result Sheikh Hamdan has taken the decision to retire the colt to stud.

Mohaather won Group races as a two, three and four-year-old and reserved his best effort for his last outing, where he beat the winners of this year’s English and Irish 2,000 Guineas, together with dual Group One Royal Ascot winner Circus Maximus, quickening from an impossible position inside the last two furlongs in the manner of a top-class miler.”

A son of Showcasing, Mohaather won five of just eight starts, with his other victories including triumphs in the G2 Summer Mile, G3 Greenham Stakes and G3 Horris Hill Stakes.