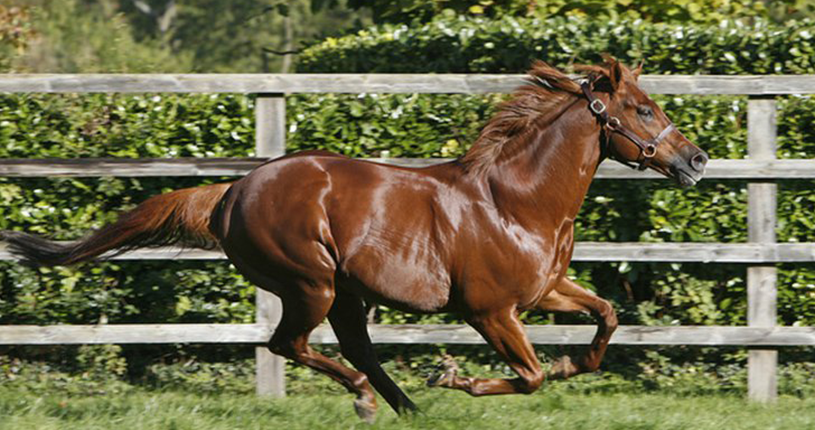 PIVOTAL, the Champion Sprinter and multiple Champion Sire and Broodmare Sire, has been retired from covering duties. The 28-year-old son of Polar Falcon has been a stalwart and flagbearer at Cheveley Park Stud since his retirement to stud in 1997.

Bred and raced by Cheveley Park Stud, he was trained by Sir Mark Prescott. A track record breaker as a 2 year old, he was crowned Champion Sprinter as a 3 year old, with the undoubted highlight coming in the Group 1 Nunthorpe Stakes at York, when prevailing by the narrowest of margins to become the first Group 1 winner to be both bred and owned by Cheveley Park Stud. Prior to that he had shown all his battling qualities and tenacity in winning the Group 2 King’s Stand Stakes at Royal Ascot.

PIVOTAL took up stallion duties at an initial fee of £6,000, and immediately proved popular with commercial breeders. He was a leading British based first season sire, and soon sired his first British Group 1 winner in Kyllachy, who followed in his father’s footsteps in winning the Nunthorpe Stakes, before also retiring to stand at Cheveley Park Stud. PIVOTAL went on to quickly rise through the stallion ranks and was leading British Based Sire by individual winners on no less than eight occasions, and was twice crowned Leading British Based Sire by earnings. To date PIVOTAL has sired 32 individual Group 1 winners, including the Classic winners Sariska, Halfway To Heaven, Falco, Buzzword and Saoire, as well as Dubai World Cup winner African Story, and most recently a Group 1 brace on QIPCO British Champions Day with Addeybb and Glen Shiel winning the Champion Stakes and British Champions Sprint Stakes, respectively .

Already PIVOTAL’s legacy is starting to live on through both his sons and daughters. He was crowned Champion European Broodmare Sire 2017 to 2019, and his daughters produced the Group 1 winners Love, Magical, Golden Horde and One Master last season, as well as multiple Group 1 winners Cracksman and Advertise in recent years. He is also making an impact as a sire of sires, with seven of his sons having sired Group 1 winners to date, most notably Siyouni with last season’s Prix de l’Arc de Triomphe victor Sottsass and Dewhurst Stakes winner St Marks Basilica.